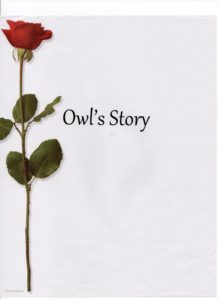 Written By A 16 Year Old Multi-Generatinal Satanist Who Was The Girlfriend Of Owl Who Himself Was A Multi-generational Satanist. Owl Was Also A Heroin Addict, Bi-Sexual, A Vampire And A Lead Singer Of A Very Popular Heavy Metal Music Band And Who Had Become A True Believer In Christ Jesus, Water Baptized In A Swimming Pool And Who Became Pastor’s Spiritual Child. Owl Is Now In Heaven After Being Physically Sacrificed In A Summer Solstice Satanic Ritual.  But Owl Went Out As Jesus Did – With No Demonic Spirits In Him And Completely Healed Of His Heroin Addiction And Without Any Fear Of Death Or Hell.

This Precious Spiriutal Child Of Pastor’s Assignment Was Finished In Satanism And He Was Ready To Go.  He Gave His Life Freely And Before The Knife Came Down, His Heavenly Father Took Him Up Into His Arms Of An Angel Before Satan Could Touch Him.

Owl Is At Spiriutal Peace And Still Working/Ministering For Agape Love ( That Is Another Story ). He Visits The Garden Of Eden On Earth and Walks and Talks With Wilber and The Living Creatures. He Is Free and Healed.

He Would Desire For You To Hear His Story Of His Silent Cries From Out Of A Life Of Multi-Generational Satanism, and Out Of The Fear Of Death and Becoming A Spiritual Child Of Pastor and Her God, The Heavenly Father/Agape Love Himself.

Hello, Well I guess I’m now free to tell you Owl’s story.  I spoke to him today.  He’s so sick right now, he must have been dead drunk, because he gave me permission to share his story with you.  He wants you to know him, then afterwards, he thinks you will leave him ( sound familiar ).  But Anyway, #1 from now on, you must call him Owl, once you understand why it bothers him so much, you will never speak of Richard Williams again.  I will try to keep it brief, but anyway.  But 1st I want you 2 knew this letter is from both of us, me and Owl.  He’s goin to see this afterwards to make sure I told it right and everything.

Well, Owl Basically Grew Up half and half, his mom was sort of a “Christian “, but around Owl’s 5th birthday his mom and dad got a divorce and Owl went to California to live with his Satanist father.  Owl was named after his father, Richard Williams.  Owl grew up in the “familie’s clan” of multi-generational Satanists.

At age 6 or 7, Owl came home from school to find his father dead!  He committed suicide, leaving Owl to survive by himself.  Owl’s mom flew out to get Owl, taking him to her home in New York City.  He lived there about 4 years leading a “split-life” days as a “Christian” and nights as a “Satanist”.

His mom got remarried when Owl was 13 and they guy she married also named “Richard” beat him and his mom constantly for 2 years.  Until the sexual abuse started between Owl and his step-dad.  Everything blew up and his mom refused to leave the 2nd husband and totally ignored the sexual abuse that was going on,

When Owl was 16 years old there was a lot of trauma, leading to Owl’s addiction to Heroin, Cocaine, and Morphine.  He began drinking heavy and shooting up, just to cope thru this hellish life.  Finally, he saved enough money to get a bus ticket back to California.  His mom sat and watched her 2nd husband beat and rape Owl, her only son!  She did nothing!  Before leaving for California, Owl begged his mom to leave her husband and go to San Francisco with him, but she chose a guy over her own flesh and blood son.

Changing his name from Richard To Owl, he went seeking out many of his real father’s relatives – and coven members.  By then, he had joined the Church of Satan ( again ) and quickly rose into a high position in a side version of his families “clan” and eventually made ties with the BROTHERHOOD and a young multi-generational high priest who would take him under his wings and raise him.  Owl was trained in the BLACK ARTS and eventually through another multi-generational high priest, Owl met me. Owl moved to Where I was living when he was 18.  I was about 11 years old.  I have known Owl ever since.

So basically, he despises the step-father, Richard.  He barely knew his real father.  He dropped the name Richard because of the hate and pain.  Now you know the SAD story of Owl.

Are You Still There?

Still Want To Adopt Him After All?

Now You need to stick with Owl because it is not his SATANIC NAME anyway.  Well, I Love you.  I will see you later.  Peace and Goodbye.  Love Always.

Now Came A Letter From Owl Himself.

I Never Met Owl In Person, Only Met Him In The Spirit, Through Others And On The Phone And Through Letters.

Pastor Spiritually Adopted Owl As Her Spiritual Child Even After Hearing His Story, But Pastor Had Always Loved Him Even Before Him Telling His Story.

Pastor Carried In Her, The Greatest Gift Of All Spiritual Hearts, Agape Love From A Heavenly Father These Precious Ones Had Not Known

You Say You Love me, Even Tho I’m Blind To Everything you’ve done for me

To Every Tear You’ve Cried,

You’ve Spoken Words Into My Life, Rescuing Me From Burning Flames

I Just want you to know

I can still tell your different, you care for an enemy

So much has happened, so many regrets

I don’t have much time left, my assignments almost thru

Owl wrote To Pastor once again just before his earthly death in a satanic ritual.  He was unable to physically be free of his spiritual heritage of multi-generational Satanism, but on the way to the altar to be sacrificed, he asked God to let him go out as Christ did.  Owl’s Newly Found Heavenly Father Showed His Mighty Agape Love For Owl Right In The Spiritual Presence Of Satan Himself.

Owl, Pastor Spiritual Son Was about 29 years old and was loved so very much by The Heavenly Father and Pastor Deborah.  Owl Had Been Spiritually Saved Almost one year at the time of his death.

Well I Suppose you are doing better than I am.

You don’t have less than a month to dwell on this lovely earth!

Well, It was good to hear your voice once more, I am being missed already

I am really very grateful to you.  It amazes me how you’ve stuck by us and her especially I Know, believe me I do, how stubborn she can be and how difficult she can make things.

Hey, I didn’t meant to hurt anyone and certainly not her.  I was just say way too confused and selfish.

I am glad we knew each other, one way is better than not at all.

You have to understand, she is very protective of those children, even from me

Like if I’ve been drinking, she’ll not let me near my own son.  The point is, I do not know if there will be a day she’ll fully 100% trust you to see them.  Most likely that will never happen.  And as is planned, in December 2001 or possible October 2001, they’ll be given back.  And she will be on her merry way.  Not to ramble on and on.

But I do hope, one day, you’ll see everyone

But I’ve learned, that’s all up to god ( Jesus)

So now there’s nothing left but goodbyes

( that was the name they knew Pastor by until The Heavenly Father Changed Pastor’s Name to her First Name, Deborah, which is another story to tell of Identity Changed Through Death )

My last words to you are…

I did get to speak to Owl, This Precious young man, my spiritual child a few hours before his death in a satanic ritual.

Death Is Always Apart Of My Life And The Ministry Of Spiritual Re-Conciliation.  Loving These precious spiritual children is hard and there are always many goodbyes.  I have had to learn how to help them step into the Arms Of Waiting Angels and sometimes to stop Death Itself, To Stop Time, To Step Into Flames of Fire To Offer The Gift Of Agape Love To Them.

So, Owl and I Prayed, we said our goodbyes.  I cried with tears of Agape Love and Happiness.  He left this earthly world fully knowing and believing and trusting Jesus Christ.  He Knew that the plan for his life and it came through

his choice to go out in death as Christ Jesus did, Free of Demons and Putting His Spirit Into the Hands Of The Heavenly Father Just As Pastor Had Taught Him. The Heavenly Father’s Will/Purpose for Owl ws to Begin spiriutally BREAKING THE POWER OF THE FEAR OF DEATH in those living in the Kingdom of Darkness by spiriutally removing all the demonic spirits out of Owl’s life to answer Owl’s prayer to be like Jesus for there were no demons in Jesus when he did on a cross long, long ago.

Satan and Hell Had No Spiritual Victory in Owl’s Death!

Through Owl’s Death, The Power of The Fear Of Death Was Being Spiritually Broken Over Many In The Kingdom of Darkness.

He Knew I Would See Him On The Streets Of Gold

Satan Lost The Victory Of The Fear Of Death!

The Power Of Then Fear Of Death Was Being Spiritually Broken For So Many Others Still Living In The Kingdom of Multi-Generational Satanism Because Of owl’s Courage And Love Of Other’s To Be Free As He Was.

For Greater Love Has No Man Than To Lay His Life Down For Others To Be Free!’

Owl Laid Down his Life So Others Could Be Free In The Agape Love Of Christ Jesus and His Heavenly Father And From The Fear Of Death Itself!

Thank You My Spiritual Son, Love You So Very Much

Thank You My Son For Enduring To The End

Thank You My Son, Owl For Holding Your Head Up High As A Child Of God, A Son Of The Heavenly Father Of The Kingdom of Heaven

You Will Never Be Spiritually Forgotten Even Here On Earth or In Heaven, A Way For Your Voice To Be Heard Has Been Opened and Your Story Is Being Told

Owl Spiritually Went and Is Spiritually Enjoying The Agape Love Of The Kingdom of Heaven, He Does Visit The Garden Of Eden If He Is Allowed To Help Another Believe In His Story. Yes, He Knows Wilber!

Owl Received A New Spiritual Family, A Father, A Mother and An Older Brother And He Is With The Family and Will Be With Us For All Of Eternity.

Even Now As I Write This For Others To Hear Silent Cries and To Believe That They Are Heard Even In The Kingdom of Darkness/of Ignorance and Even Through The Captivity Of Satan, Agape Love Was Sent To Reach The Hearts and Hands Of Ones Such As Owl. For There Are Millions and Billions Such As Owl and each and every one is loved with the same Agape Love As Owl Was and Still Is by Pastor Deborah and The Great Agape Love Himself/The Heavenly Father. You Who Are Reading Owl’s Story maybe one. Owl Is Truly and for All Eternity Free and Loved Beyond His Comprehension and Understanding, But Loved He Is.

I will see you again, but not now for I have much spiritual work to do yet, see you In Eden