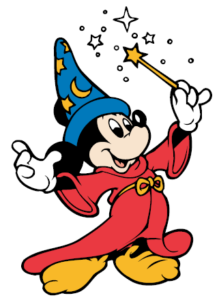 Little One, Little One – Yes Sir, Let’s Walk and Talk Some More – Ok, Your Majesty, I’m up and ready.

Remember Where we left Mickey, Yes, Sir I Do.

And The Water Disappeared and so did the Army of Brooms!

Little One, how did Mickey feel at that time?  Not Very good – Tell me how you think Mickey’s Hidden Man of His Sub-Concious/His Hidden Heart was feeling?

Sir, He probably felt very HUMILATED.  Yes, and I think ASHAMED, GUILTY, DISPLEASURE from the Real Sorcerer.  Very Good, Little One.  All are correct.

And what do you think the Real Sorcerer was thinking and feeling about Mickey?

Mad at Mickey, yes anything else?  Disappointed I think.  Yes, Angry at him I know.  Good.

Why would The Real Sorcerer feel disappointed in Micky’s actions?

Had Mickey acted like a Righteous Sorcerer?  Did Mickey Demonstrate a Proper and Legal Way of The Hat Of Magic?

and didn’t want to share It’s Power with anyone, not even Mickey?

What do you think, Little One?

I think The Real Sorcerer was mad because Mickey STOLE, TOOK SOMETHING that was NOT HIS, it was NOT GIVEN him as A GIFT.

So, What Do You Think Mickey had to do?

GIVE BACK THE HAT OF MAGIC!!

Yes, that is correct!

Was Mickey now a happy person?  Well, No!!  He lost what his Hidden Heart/His Soul/His Sub-Conscious Mind DESIRED to have above all things, no matter what.  Why, would His Heart Desire something so much, It would Steal Something that did not belong to it?  What was Mickey’s Hidden Heart/Person Desire From The Hat of Magic?

The Control of Power

To Control The Source Of The Power

The Thoughts of Being A Supreme Sorcerer

Great in the Universe

Were these bad or wrong Thoughts for Mickey’s Hidden Heart to Have and Desire?  I Think so, sort of. Right?

These topics we will talk about later in another story.  Do you think that The Real Sorcerer was happy and pleased with Mickey?  No sir, He was Not!

Ok, Little One, so after the Rightful Owner of the Hat of Magic was given back His Own Property, The Hat of Magic by Mickey himself, and put it back on his own head, what do you think happened?

He beat Mickey up, yelled at him, disowned him?

Sort of, Little One.  Mickey knew he had done wrong and was humbly handed back the Hat of Magic from off his head and handed it back to the Rightful Owner, The Righteous Sorcerer.  Then Mickey, began to humbly walk out of the room when he felt himself being lifted up and swept out of the room by a BROOM!

And the Sorcerer said to Mickey, Don’t forget your Broom!

So, when one STEALS POWER that HAS NOT BEEN GIVEN it LEGALLY AND IN RIGHTEOUSNESS – ONE IS A THIEF!!!!

Mickey’s Hidden Heart/The Sub-Conscious Person will STEAL ANOTHER’S PROPERTY, POWER, AUTHORITY, CONTROL for Itself and to make itself feel

IN CONTROL OF THINGS AND SITUATIONS

and now, Little One, What have you learned from this story of Mickey, The Sorcerer’s Apprentice?  That one must NOT TAKE somebody else’s that had not been given to you, good.

And That before one can be given something of Power – one needs to be Educated, Trained and Supervised for a long time before, they are ready to operate the Gift/A Hat Of Magic alone and not make trouble and get in situations that one can not control and become very dangerous.

What happened to Mickey, Sir?

He went back into his rightful position of being an

Back, under Authority and Supervision.  Back to School and Mentoring.  Back to his place of being a student under His Teacher, The Righteous And Mature Sorcerer!

Back to carrying the water himself and sweeping the floors with his own hands with a broom. Back to the Position he was in before, but now with much more Truth about himself and his deceptive heart’s desires that would STEAL ANOTHER’S PROPERTY and USE IT for his own profit and glory without permission and without education and training.

Mickey returned back to his original position, as an APPRENTICE under the Sorcerer!

Did, The real Sorcerer stay mad at Mickey forever?  No Little One, He did not because he knew Mickey’s hidden heart needed transformation/changing/development/education/re-programming/supervision and if it go there things, Mickey’s Hidden Heart would grow into a

RIGHTEOUS SORCERER IN HIS OWN RIGHT

And he would get HIS OWN HAT OF MAGIC that He could use to help others.

So, Little One, that ends this story of Mickey and The Hat of Magice. Did you enjoy the story?  Oh, yes Sir I did.  I have much to think about Mickey and my own Hidden Heart and Power and Being an APPRENTICE under your, Your Majesty.

What story are you going to tell me next?  I will let that be a surprize.  Ok.  Let’s keep walking.  Can we sing a song?  yes, Little One we can.

Will the Flowers Sing with us?  Yes.